My presentation — “Mundane Conversion as Moral Action” — was in the last session on Sunday, which is just as well because it gave me the most opportunity to figure out what I wanted to say. We were back in the Sala Conciliazione, which could not have been a better place to present. Below are pictured three views from the sala: up the hill in Assisi, the fountain of the Piazza del Comune, and the Temple of Minerva (with the Roman columns) built in the FIRST CENTURY B.C.!!! (In the 16th century it was converted to the Chiesa di Santa Maria Sopra Minerva.) 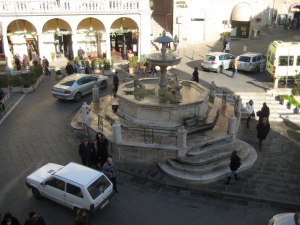 The conference ended with another nice lunch at the convent and goodbyes. Because I was not leaving until Monday morning, I decided to hoof it around Assisi for the afternoon. Assisi is really all about St. Francis and St. Clare. Everywhere you turn, there is something to remind you of these two. 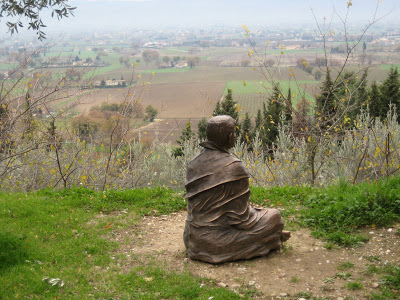 Because I was staying 8 days in Italy and brought 4 days worth of clothes, I asked the sisters at Suore Svedesi where I could do laundry. They said at the traffic circle just beyond Santa Maria degli Angeli, a huge basilica that is historically significant in the lives of St. Francis and St. Clare. So, I began trekking down the hill. It was only 4km, according to the signs, which in my mind I thought was about 2 miles, but I think is closer to 3. In any event, hitting the flatlands gave me some wonderful views back up the hill and also took me to the awe-inspiring bascilica.

Unfortunately, because it was Sunday and there were only 5 washing machines, I wasn’t able to do laundry. I’m not sure if I wanted to anyway, since detergent, washing, and drying would have been about 10 Euros. $15 to do laundry? Hmm. Not sure about that.

This site uses Akismet to reduce spam. Learn how your comment data is processed.